Get On The Dance Floor Season 8

Reliving Get On the Dance Floor Season 8

In what may well be termed the best dance event in Kolkata, Get on the Dance Floor Season 8 was a medley of dance, food, fun, and games. Held at Tangerine Royal Banquets (Sector V) on the 27th of March 2022, it was an evening full of surprises, amusement, and electrifying performances. 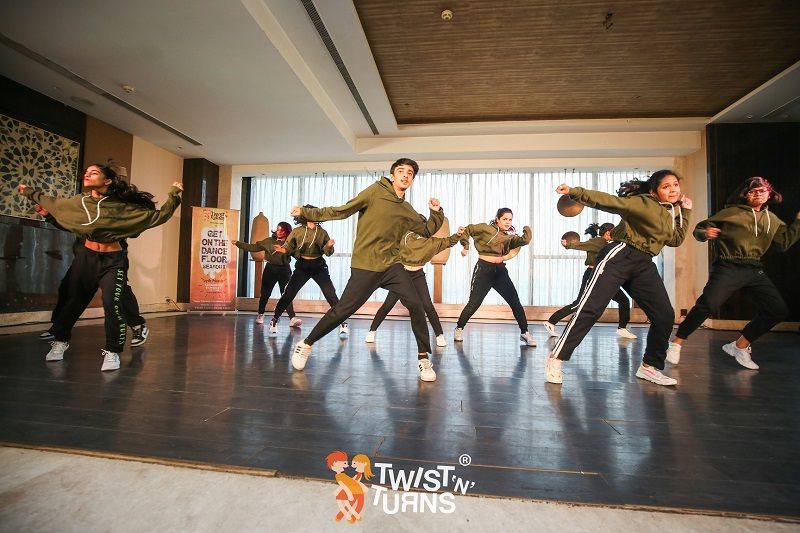 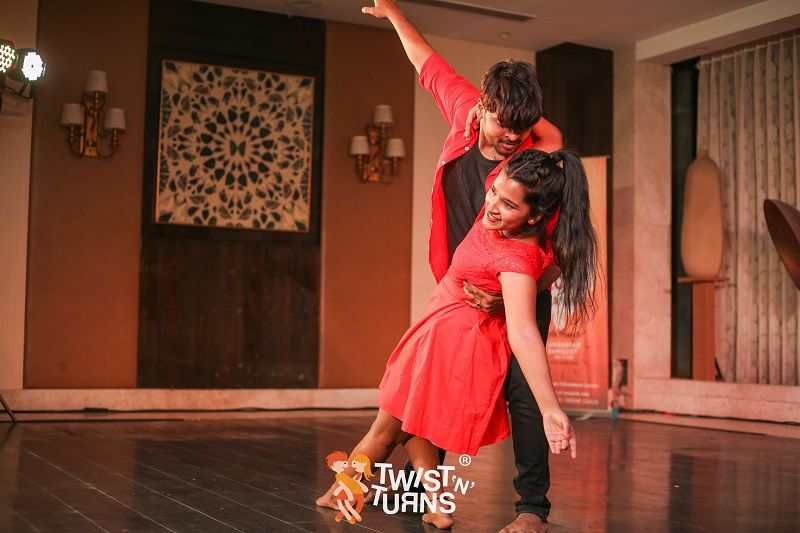 This romantic duet by the two talented dancers wowed the audience with their graceful moves.

Get on the Dance Floor is organized each year by Twist N Turns Dance Studio in Kolkata. It is perhaps the most anticipated dance event in Kolkata. It is an annual party for the senior members of all 6 studios of the best dance school in Kolkata. 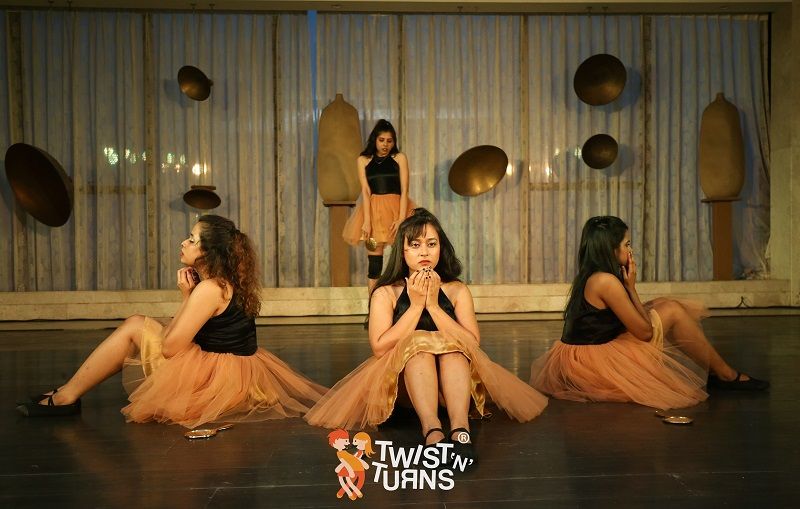 A wide variety of dance forms marked the evening-- from jazz to contemporary and hip hop to salsa.

As Get on the Dance Floor entered its 8th season, excitement ran high among performers and audience alike. Twist N Turns Dance Studio in Kolkata sent out invitations to the dancers as well as their family and friends. The huge banquet hall was filled to the brim with eager participants and expectant audience members. 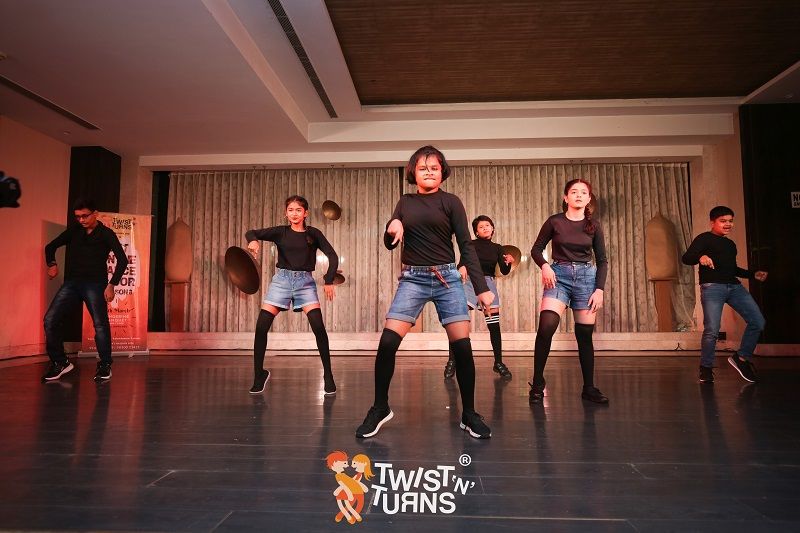 From nervous first-time performers to experienced dancers, all stunned the audience with their flawlessly executed moves.

The best dance event in Kolkata saw a huge turnout, and the guests were treated to an unforgettable evening! The stage was ablaze with amazing dance routines set to lively music and stunning backdrop lighting, all of which combined to create a wonderful atmosphere and set the tone for the evening. 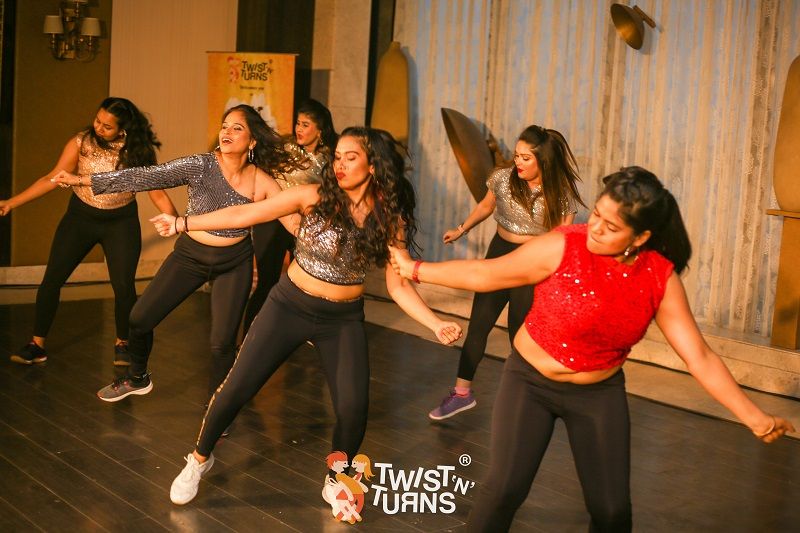 Get on the Dance Floor Season 8 kicked off with a bang as emcee and creative director Nikita Sangai introduced the first item from an impressive line-up of 32! This was the highest number of performances to date in the best dance event in Kolkata.
The first two items were group dances in two distinct styles—hip-hop and contemporary. They mesmerized the crowd with an enthralling performance of “Tujhe Bhula Diya”. A scintillating romantic duet followed that set the temperatures soaring. As the evening progressed, a wide variety of dance styles were seen on stage—from contemporary and hip hop to salsa and jazz! All of this combined to make Get on the Dance Floor Season 8 one of the best dance events in Kolkata. 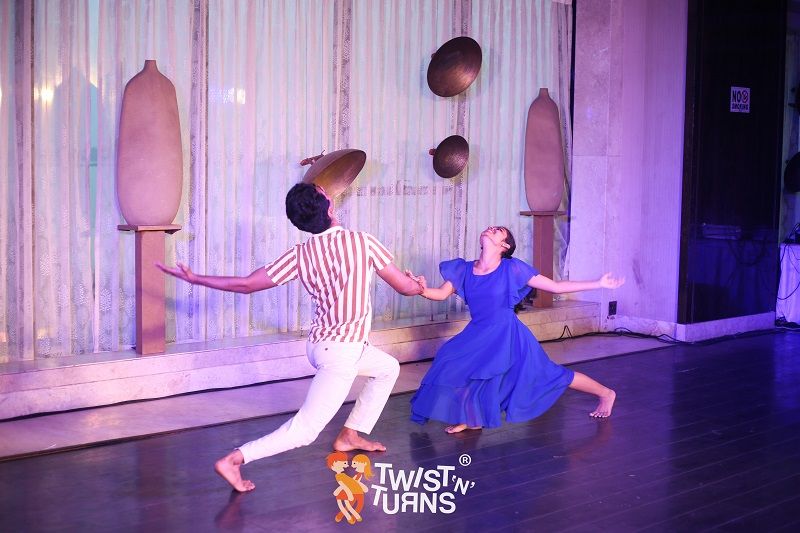 Romantic duets set the temperatures soaring at Get on the Dance Floor Season 8.

Participants and non-participants alike grooved to the chart-busting Bollywood and English numbers. Members of the audience too were spotted shaking a leg to the beats. The organizers distributed whistles among the audience members, and guests were encouraged to use them as applause. The halls rang with whistles and hoots after every performance! The energy was high all around as everyone vibed with the groovy music and dramatic lighting.
As the performances kept coming, so did the food! As the event started, mouth-watering appetizers were passed around among the participants as well as non-participants. Refreshing drinks were also handed out to keep the guests cool in between the performances. Even as the group dance routines worked the crowd into a frenzy of excitement, the duets wooed the audience with romantic numbers. These were interspersed with solo performances where the dancers amazed the audience with their crisp and confident steps. Both nervous first-timers and experienced performers alike set the stage ablaze with their fearless moves. The senior performers burned up the dance floor as they shook a leg to the season's chartbusters.

The dancers experimented with a variety of dancing techniques, much as the DJ did with music. The best dance event in Kolkata brought together dancers from all over the city—all united in the language of music. The audience was treated to a captivating blend of dance forms set to hit songs like “Gasolina” and “Banno”. 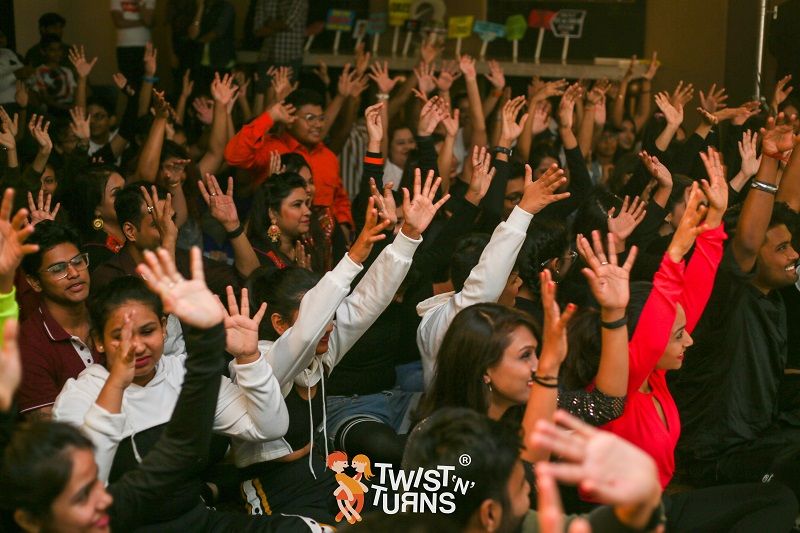 The audience swayed and grooved to the music off-stage even as the dancers performed onstage.

Like last season, this year’s Get on the Dance Floor too had its fun-filled Zumba session. The Zumba squad took to the stage amidst roaring cheers and upped the energy of the hall a few notches. With time, everyone joined in and grooved to the foot-tapping music. 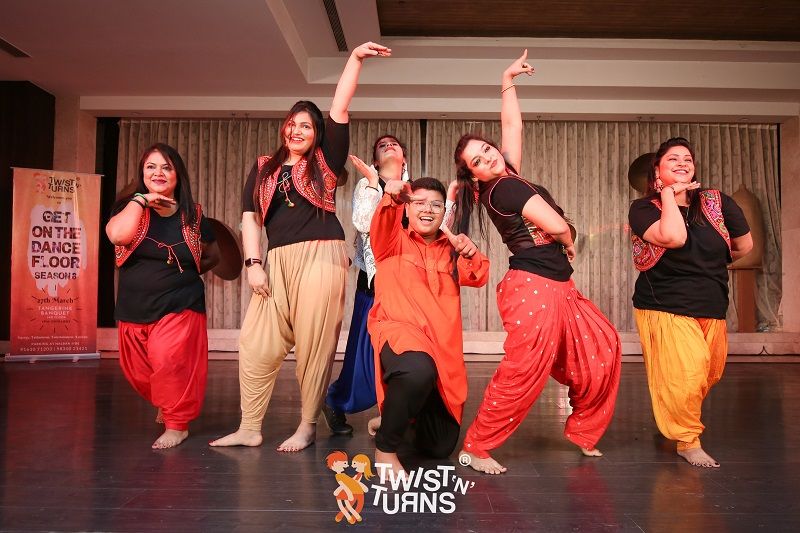 The Zumba Squad set the entire hall grooving with their energetic beats and hatke moves.

The evening was topped off by some hugely entertaining numbers by the instructors of Twist N Turns dance studio in Kolkata. Each instructor brought their own unique persona onto the stage and added spice to the performances. The instructors of all 6 studios came together to give performances that were absolute visual treats. They explored all genres of dance— from a moving jazz number to an upbeat hip-hop dance routine. 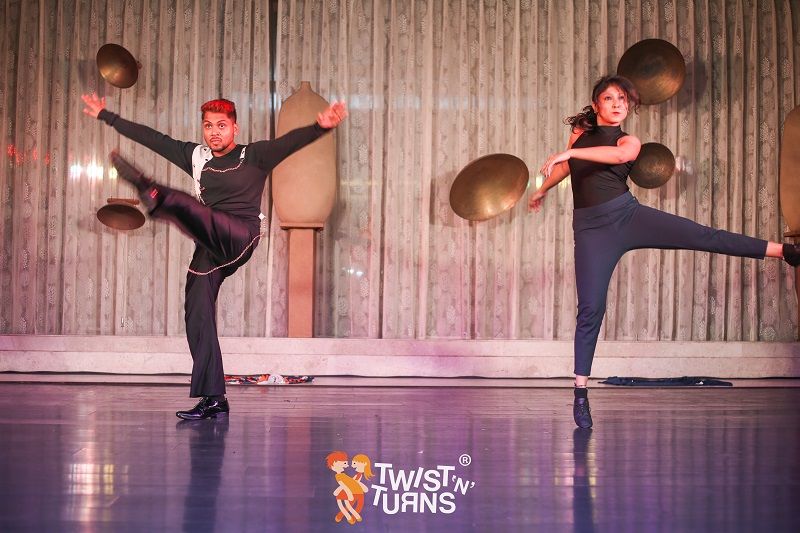 The instructors awed the audience as they swayed and twirled flawlessly to the music. 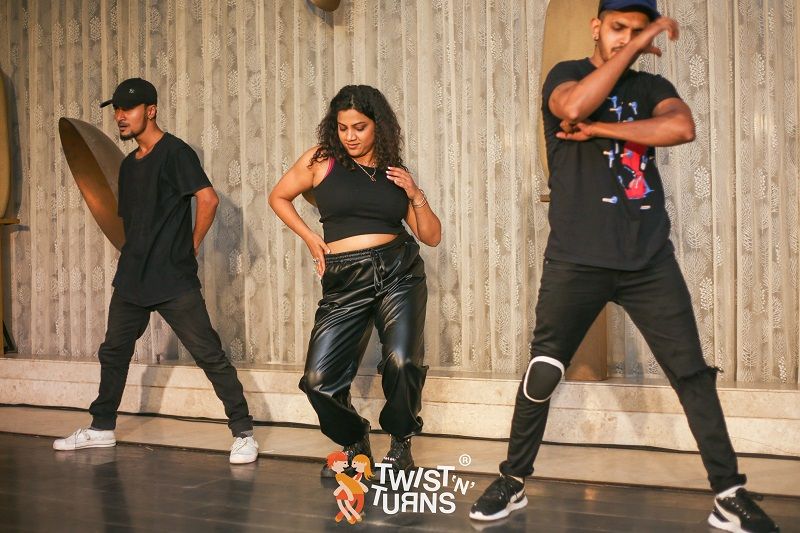 Instructors busted a move (or two) to loud cheers from the audience.

But what really brought the event to its exhilarating peak was an impromptu salsa performance by none other than the power couple—Tapas Das and Nikita Sangai! 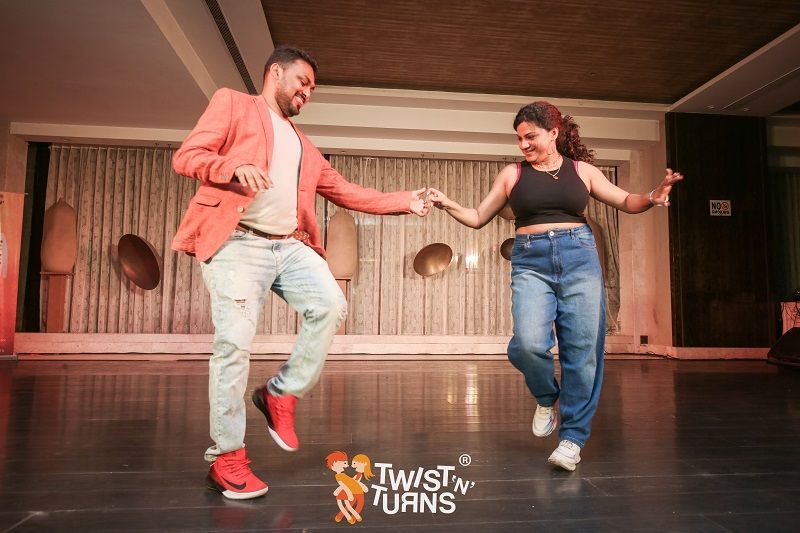 The audience was treated to an impromptu performance by none other than the power couple themselves!

Buuuuut…. Get on the Dance Floor Season 8 was not just about dance! It was all about having a good time. That’s why there were several entertaining activities planned for both the spectators and the dancers. One such activity involved our emcee summoning members of the audience to deliver famous movie one-liners or do Bollywood-style dance routines to popular songs. Instagram dances were not left out either! Twist N Turns dance studio in Kolkata truly surpassed itself with this year’s Get on the Dance Floor Season 8.

But perhaps the most engaging activity of the evening was the “Shuffle and Groove” game! The emcee, Nikita Sangai, passed around chits among the guests with dares written on them. After much shuffling, the guests picked up a chit at random. Then it was time to perform the dare mentioned on their chits—be it dancing to “Kacha Badaam” or shaking a leg to “No Lie.” Everyone put on their dancing shoes as they bust a move to this year’s chart-toppers.
Fun and dance mixed seamlessly together in the Nimboo dance, where random people got on the stage to dance—but holding lemons on spoons in their mouths! The goal was to keep the lemons from falling to the ground. The audience cracked up at this hilarious spectacle and everyone thoroughly enjoyed themselves both on and off-stage. The evening was filled with similar fun activities that kept the audience engaged and upbeat. Colourful placards were prepared too, and it was such fun to watch the guests posing with them for the ‘gram! Our Nimboo dance set the ball rolling for all the fun activities that followed.

As the performances came to an end, everybody needed to recharge for the afterparty! It was time for some dinner! Food coupons were issued to all registered guests, and a multi-course dinner was served to everyone. As desserts rolled around, everyone geared up for the afterparty! Everyone-- dancers and non-dancers alike-- let their hair down (literally!) for this absolute rager of an afterparty!

Once the tables were cleared away, it was time to let loose again on the dance floor. This time everyone joined in on the fun and madness. For the 8th time in a row, Get on the Dance Floor reminded everyone in attendance of the valuable and essential worth of dancing. Dancers and non-dancers alike were united by the common binding power of music. The banquet hall rang out with hoots and cheers as everyone let their hair down to the songs played by the DJ. It was late, but the energy at Tangerine Royal Banquets was unmatchable.

Dance, food, games, and activities conspired together to make Get on the Dance Floor Season 8 one of the best dance events in Kolkata. Dancers and guests alike went home tired but elated after a magical evening.
“After a lot of research, I found this dance institute because my sister confessed, that she wanted to be a dancer. Yesterday’s show reassured me that my sister is under the right guidance. Each choreographer is unique and amazing,” a family member gushed the next day. Similar comments poured in over the next few days, to our immense pride and satisfaction. It is comments such as these that make Twist N Turns dance studio in Kolkata one of the best dance schools in Kolkata. The afterparty brought everyone together to share in the universal language of music and dance.

GOTDF is a time to let go of our troubles, have some fun, and be in the spotlight, and everyone in the studio took full advantage of the opportunity! It was organized by the best dance school in Kolkata—Twist N Turns Dance studio in Kolkata. Families and friends joined in on the celebration, making it that much better.
Everyone looks forward to the event each year and works hard to have a great time with everyone. It is an event where all can dance, laugh and play together while forming fond memories. As this year’s rager came to an end, happy guests left with a huge smile on their faces, making the event a great success for us.